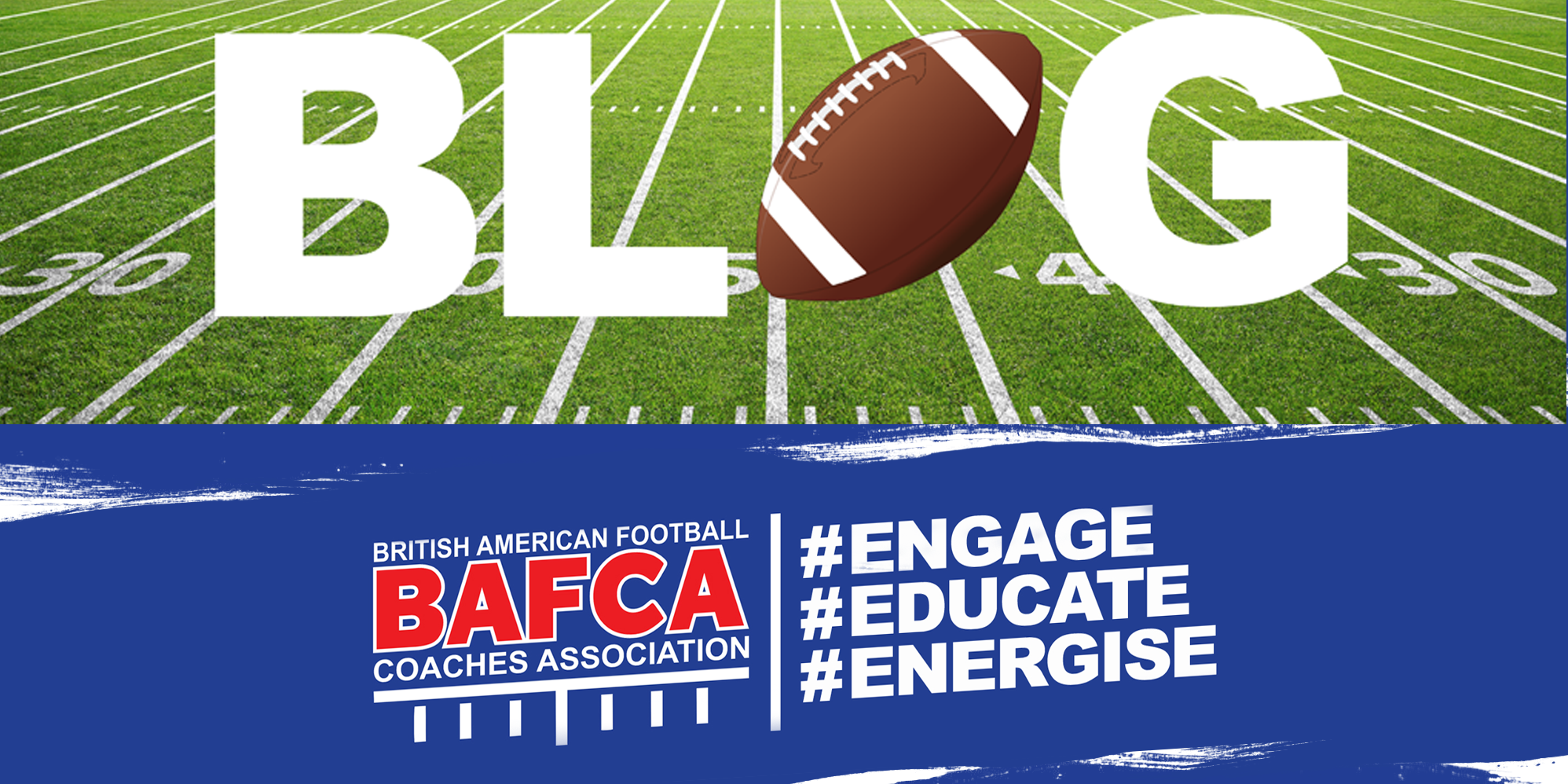 As coaches we tend to arrive in our positions after our playing careers are over. A career during which we inevitably specialised at one position. This means our knowledge just isn’t broad enough to understand the complexities of the game. Don’t believe me? Think about your peers who describe themselves as ‘Offense’ or ‘Defense’ coaches. But just as any good Quarterback has to understand Defensive coverages, so good coaches need to understand all position groups.

This knowledge can’t just be learnt by watching Football on TV or diving in to a thousand YouTube videos. The best way to gain the knowledge is to push yourself, learn from other coaches, tour other teams in the off-season, attend conventions, and if you’re feeling brave enough, making the jump to coach a different position group.

Here is the irony though. As coaches, we often begin and end our careers with the same teams, having built up loyalty and commitment to our club. The very thought of going to another coach on another team to ask for advice is considered anathema to some, as if it in some way indicates weakness and a lack of knowledge. Yet for those that do, they will find open doors, like-minded colleagues and a willingness to share that takes many by surprise. And once you push on that open door it unlocks a world of opportunity.  (On the flip side it can be quite challenging to find out that the coach from your deadliest rival is not actually a two headed dragon but another volunteer like yourself dealing and coping with exactly the same challenges as you).

I hate the phrase ‘old boys network’ as if there is some form of exclusive club that keeps young upstart coaches at arms length. If you remove the first two words from that phrase, you get a lot closer to the truth. A ‘network’ of colleagues, who can assist, share, cooperate and lend advice. Even the experienced, older, coaches are always learning and you will be surprised at just how much they will share and co-operate.

Image 1: GB Students coaching staff Finland 2015. How many BAFCA Presidents can you spot?

Coaching and Football aren’t mutually exclusive. In my day job, I work with trainee coaches from a multitude of sports. The most common mistake I see constantly made is the confusion between coaching and instructing. As coaches, we need to be in the market of providing directed practice not repetition. So whilst digging up new drills from text books and online videos may keep practices a little fresh, it doesn’t necessarily help with deeper learning from your players.

You may have heard or read about the 10000 hours of Mastery as neatly summarised by Malcolm Gladwell in his excellent book Outliers. The basic premise being that it takes the said amount of hours to become an expert in anything. Now think about your players on your team. By my maths, my players participate in 5 hours worth of practice a week over 33 weeks. That’s 165 hours a season if they attend everything. Even if a player has played Youth or junior football and reaches their final year at university they’ve barely scraped a thousand hours and yet these same players, if left unchallenged, can quickly develop a bad attitude towards practice and a ‘I know it all now’ disposition.

Improvement must not just come in others, as coaches we also need to be reflective, constantly striving to improve ourselves and evaluating how each session has gone. Referred to as the ‘Coaching process’ this is exactly the same mechanism we put players through. We plan, we run the session, we review, and then we plan again: putting what we learnt, or what was missing, into the next practice.  If we identify problems or a gap in our knowledge then we need to plan an intervention for ourselves on how to bridge this gap and improve.

Coaches also need to understand they are in this for the long term and developing a Football program requires a longer-term approach to player development. I used to half jokingly suggest I was a much better coach when I had players that were more talented. However, we know that through praising hard work and effort (rather than ‘natural ability’) all players have the ability to master a skill (see Carol Dwecks work on Growth Mindsets).  It will be a players physical makeup that initially makes a difference. But speed, strength, agility can also be worked on and improved. 3. Learn about your players

What is it that you value the most about Football? Winning is clearly important or you won’t be in post very long so let’s rephrase the question: What is your primary commodity?

The answer (clearly) is your players. They are the gears that make the wheels turn, the chess pieces that make the blocks, catches, and tackles that wins games. But unlike machines, or pieces on a board, players are living, thinking (over thinking!), complicated individuals with different motivations, and states of arousal and concentration.

People want to belong to a team where they are valued, where they can enjoy themselves, be physically and mentally challenged, and where the coach knows their name. So take time to learn about your players, ask them key questions about their family, their job or school, and where they are from. It may seem facile, but an understanding of your players’ well-being will create a greater commitment from them and create empathy for them if they encounter personal difficulties outside of football. A relationship built on understanding leads to greater buy in and cooperation. It eliminates a feeling of favouritism/bias; it can also make the difficult decisions easier. It will have long term benefits for players, coaches and the programme as a whole. A word of caution though. Understanding is not leniency; you are not trying to become their friend.

Teach your values: Expectations can never be learnt through osmosis. Eradicate an excuse culture with your players and promote self-responsibility. Bad choices should have consequences, so what are your red lines and what are your penalties? What are your rules about attendance at practice, deadlines for call offs, and how does that relate to game time?

It may feel at times you are the only coach in the country who has injuries, drop-outs, or last minute no-shows. However, it is happening up and down the country. I use the phrase: it’s how you face adversity when it inevitably appears, to remind myself, and my players, that it is never plain sailing. Image 2: Note not a single player is actually looking directly at their coach…..

4. Stick to the Plan (but be prepared to adapt!)

Session Plans, install schedules, scouting, game prep, and season planning all fall within a coaches responsibilities to varying levels. Whether or not you are writing them or following them, you have a duty to be familiar with what is happening and how best to maximise your and your players time.

One of the trickiest challenges for any UK coach is how to deliver similar content on different levels so that Rookies and Veterans alike can be challenged during a session. It is imperative therefore that you match opponents appropriately in drills and you challenge players at their current level of ability whilst giving them every opportunity to succeed. Diagram 3: The Yerkes-Dodson Law and the resulting Inverted U Curve of Arousal vs. Performance

If your session is affected by a poor turnout, stick to the plan. You have a schedule to keep to and every session is important. Players very quickly realise that by not attending they have missed out, and just like in school, will start to fall behind. If you end up doing nothing or cancelling the session, players can easily justify to themselves their absence (‘I didn’t miss anything important’).  That being said, it would be unrealistic not to adapt the lesson plan when faced with a single player in a position group. But reward those who do attend with your unbridled enthusiasm, energy and knowledge and make them leave the practice buzzing about their good fortune at having more of your focus and attention.

My last piece of advice is shamelessly stolen from Field of Dreams: If you build it, they will come. If players value your practices, enjoy the sessions and feel that they have improved; attendance will never be an issue for you. Believe in what you are doing, stick to your guns, and coach every session with as much energy and passion as you can muster.