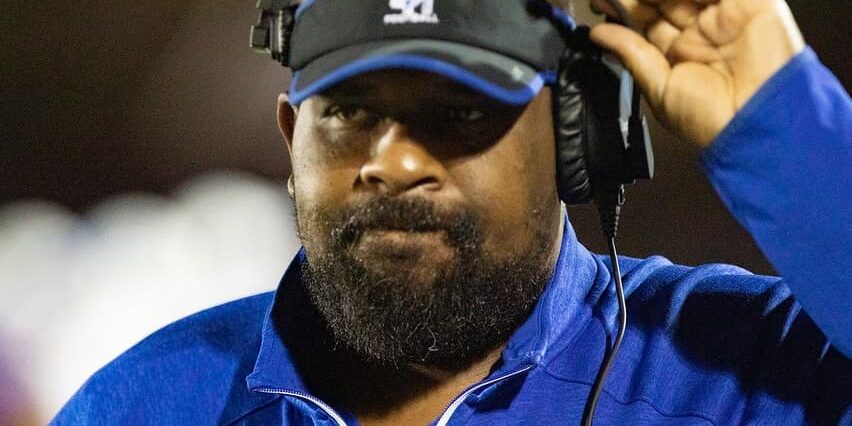 With any scheme or elements of it you need to know why you run it and understand what you’re trying to achieve.  Like many teams around the world we run multiple RPOs to stress the defense leverage in particular the perimeter defenders whether they have contain or force responsibilities.  To me the RPO is a huge addition to the run game whether it is Zone, Gap or Pin/Pull.   It allows you to run the ball effectively as it holds defenders and makes them late to their run fit.  One thing has to be absolutely clear the throw element MUST HAVE A 100% completion rate otherwise don’t run it.

For those that run Zone or considering it you should put your RPOs into ‘families’ for the easiest way to teach it.  These ‘families’ are 1 Man, 2 Man, 3 Man or 4 Man.  In this instance we will just focus on 2 Man which is QB hand off to RB or throw to Slot and 3 Man which is QB handoff to RB, keep and run or throw to slot.  We will look at it schematically and the techniques you can use.

The automatic RPO approach requires the receivers to understand the play so they run the correct RPO.  At my previous team they understood that any ‘A’ gap play such as Inside Zone or Counter you would run ‘Bubble’. If we were in Spread then #2 is the tag (Fig1.) and if were in Trips then it’s #3.
Any outside play such as Stretch they would run ‘Quick’ with #1 (Fig 2.).  If we called a two part play such as ‘Stretch Power’ then all receivers would block MDM.

With regards to 2 Man would usually apply to anyone who has a QB who may not be the most athletic but can read the End through to the ‘Conflict’ defender (usually Will) either handing off or making the throw.  Now you certainly can have a handoff and QB run with the receivers blocking MDM as your 2 Man.  As for 3 Man an athletic QB is the perfect situation as that stress on the defense is immense especially with an OL getting good horizontal and vertical movement in Zone.  Understand the personnel you have and what are their strengths then you will have the right match ups as that is the main goal. 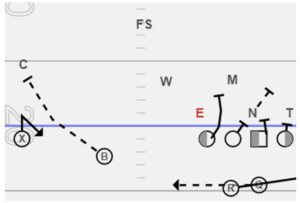 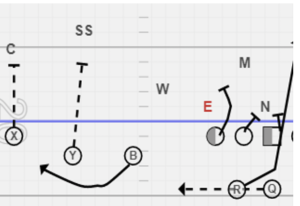 One of my favourite adjustments especially versus an aggressive defense is what we call ‘Fox’.   You have shown success with the RPO and they secondary is rallying hard to ball then you get your receiver to show MDM blocking then release up field.  The QB should flash the ball to the RB pump to the #2 then put the ball about 3-4yards from the sideline.  In Fig 4 this would be Trips LT Zone RT 52 Fox.  Here is a link to an example https://drive.google.com/file/d/1hGQwwS5RUD0c2o4G80eaMMFnMgD-z85e/view?usp=sharing 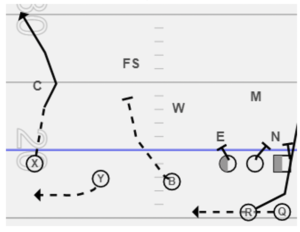 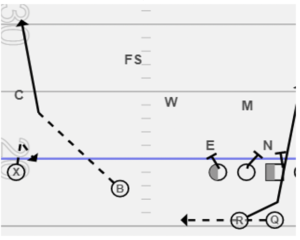 When it comes to the technique there are multiple schools of thought but we will focus on the easiest and most common.  For #1 in 52/42 you can have them do the conventional ‘Stalk’ block or you can use the ‘Jab’ technique.  ‘Jab’ is when you have the WR fire off the ball then start chopping his feet and pumping his hands mirroring the lateral movement of the DB from about 3 yards away.  On #2’s shout of “GO GO GO” the WR will explode out to the DB and block them aggressively.  This technique limits holding calls as you are not blocking for an extended period of time. As you drill you pair up the WRs on your cadence they fire off the ball and ‘Jab’ until the coach shouts “GO GO GO” they explode and block, you can get a high number of reps.
This link you can see the ‘Jab’ at the top of the screen https://drive.google.com/file/d/1CykOkQTv6tso1fgLDjv316GRCgLuusl8/view?usp=sharing
This link ‘Jab’ is at the bottom https://drive.google.com/file/d/1S8JWMZH65pfUYmi7jlKFQK2i3xxJiBkv/view?usp=sharing

With the ‘Bubble’ your alignment should be no deeper than 3 yards from the LOS.  On the snap they should drive off their inside foot, open their hips to the sideline getting roughly 1yard deep (bubbling) around the fifth step you should now be looking for the ball over your inside shoulder.  You MUST catch the ball 100% of the time, when you do get vertical now and shout “GO GO GO” to your blockers who will finish the ‘Jab’ and explode to the DB.  Best drill setup is one line of WRs about 8yards from the QB with a cone 5 yards from the WR and 1 yard deep.  On cadence the WR would ‘Bubble’ around the cone, catch the ball then shout “GO GO GO” getting vertical then the next WR steps up etc.  Then you progress to adding the blockers working the ‘Jab’.  After that you work all your combination 52/53 etc.
‘Key’ is when you have the same depth alignment but instead of getting depth you turn to face the QB and start to back pedal away then as soon as you catch the ball turn up field with a “GO GO GO” call.
‘Quick’ technique is about the vertical sell.  #1 will take up to 3 quick hard steps up field then turn back to the LOS.  I always get my players to work back towards the QB slightly to help with throw. As soon as they make the catch get vertical now! The drill is similar to ‘Bubble’ but align on the LOS about 15yards or whatever you use. A cone will be behind them inside and you run as many reps as you wish then progress to blockers and combinations.

You really can get into huge amounts of detail with tags, motions and combinations but if you run this you will have success stressing the defense with an effective run game.  If anyone has questions or want to know more than I am more than happy to go over whatever you need just get in touch.